Orange Research actually started in the basement of Les Hoffman’s Orange, Connecticut home…(It would later move to the barn in his backyard once it grew too big for the basement). A family man with two boys approaching college age, Les enjoyed working as an engineer. But he knew his creativity was limited at his day job.

A friend in the instrumentation industry came to Les for help in designing a positioning panel for an optical avionics meter. In the evenings after work, Les took to his basement (still pristine, immaculate, and freshly painted to this day) with his Atlas lathe and drill. In a short time, Les produced the “meter mover”.

More friends and industry acquaintances soon came to Les for engineering solutions. He continued to innovate and design new products, one of them being an instrument that measured pressure on both sides of a filter and indicated the pressure drop. A consummate Eagle Scout, Les thought of his Boy Scout compass and said, “I wonder if I can do it with magnets” – and came up with the magnetic movement used in this design. The Filter Fink was born.

We look forward to working with you in designing a differential pressure or flow monitor for your specific needs. 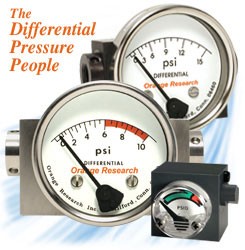 Coming to the realization that he had a business, Les finally left his day job. “What are we going to call this thing?” he wondered. Orange seemed an obvious fit as that was where the business started – in Les’ home town.

But why “Research”? As Les will tell you, he did not want his business to be known for just one static product. The word research “indicated that you were always looking into something new”. Les felt this perfectly embodied his spirit of innovation in designing products and solutions.

That same innovative spirit drives Orange Research to this day. So no, we do not research oranges! We design, customize and apply innovative engineering solutions. We look forward to working with you in designing a differential pressure or flow monitor for your specific needs.

WARNING: Some of our products contain Nickel, a chemical known to the State of California to cause cancer. For more information go to: www.p65warnings.ca.gov